Valdez School District nurse Shelby Gudgell took some time to talk with us about her journey to becoming the nurse she is today. 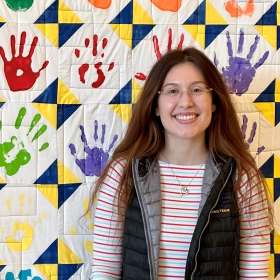 Born and raised in Valdez, Alaska, Gudgell moved to Oregon in 2015 to work on her undergraduate degree in nursing. However, missing her home state, in 2017, she transferred to UAA’s School of Nursing. She graduated in 2019 and began working at Providence Valdez Medical Center. Gudgell now holds many certifications and is also working toward a Bachelor of Science in Nursing (BSN) degree. Once she gets her BSN, she plans to get her certification in school nursing.

Gudgell first decided she wanted a career that allowed her to help others during her years as a Girl Scout.

“I was a Girl Scout for ten years, and that fueled me to want to do something to help people…I explored my options, and nursing sounded like a great idea.” She began working toward a degree in nursing in Oregon, and during her undergraduate years there, Gudgell realized she wanted to return home and complete her degree.

Gudgell looked for nursing programs in Alaska, and even though she had a few options, she chose to attend the UAA nursing program in Valdez because she would be in her hometown and had heard from others about a wonderful nursing instructor, Kelly Mitchell. When she got to Valdez, she found a supportive community and was “ecstatic” about being a part of the Valdez cohort for nursing.

While a part of the nursing program, Gudgell also completed the Certified Nurse Aide (CNA) course. She really enjoyed the course, and the instructor in particular made it a wonderful experience.

“Chris Johnson was my instructor, and he made the class really fun and had a whole bunch of information to give to us students and showed us how to do all of the skills.” Gudgell found the program “awesome” and would “recommend [it] if anyone is interested in going into the CNA program or healthcare roles in general.” After the course, Gudgell started working as a CNA at the Providence Medical Center in Valdez in acute care and in the emergency room. While working at Providence, she was in her first year of nursing school and worked as a CNA for the duration of her time in the nursing program, a decision she is happy she made.

“[I was] so glad that I did. It was interesting because especially on the weekends, I would be working as a CNA, and then on the weekdays, I would be at the hospital as a nursing student. So, my duties were really different, but I'm really glad that I got to be able to have the experience of knowing what it's like to work in a hospital right away like that.”

After graduating, Gudgell worked for Providence for a while before taking a job with the Valdez School District, a job that she says, has “been exciting. I really like it.” Now in her second year with the district, Gudgell is glad she made the decision to return to Alaska and pursue her nursing career here.

“I'm so glad we have [the nursing program]. We had an amazing nursing instructor, and we learned all the hands-on skills. The classes were all the same as the Anchorage students because it's all webcammed. So, we had the same amount of coursework as the Anchorage students. However, we're getting more hands-on experience and more clinical time, because we're able to go straight into the hospital here and work hands-on with patients and get the flow of the hospital.”